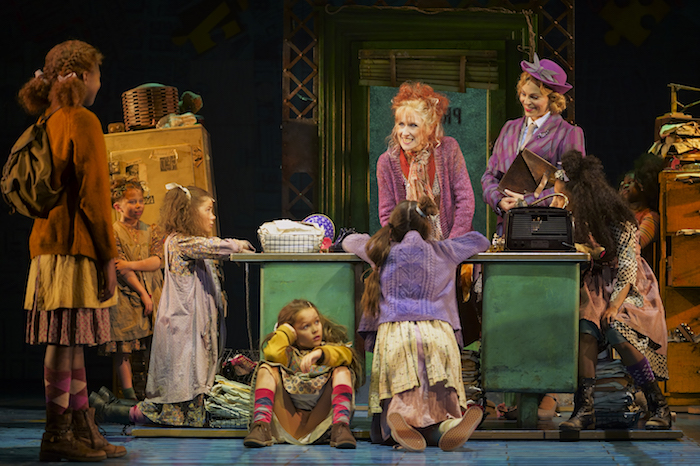 Forget the adults, it’s the kids who rule theatre at the moment. From Dennis Kelly and Tim Minchin’s MATILDA THE MUSICAL to Andrew Lloyd Webber’s SCHOOL OF ROCK, the array of young talent gracing the stage in 2019 is certainly impressive as Nikolai Foster’s touring revival of ANNIE clearly demonstrates.

Set in 1930s New York during The Great Depression, ANNIE follows a brave young orphan who is forced to live a life of misery under the tyrannical control of Miss Hannigan. Annie’s luck soon changes when she’s chosen to spend a fairy tale Christmas with a famous billionaire but the spiteful Miss Hannigan has other ideas and hatches a plan to spoil Annie’s search for her true family.

Anita Dobson of EASTENDERS and CALL THE MIDWIFE fame takes on the role of the tyrannical Miss Hannigan, previously played by Miranda Hart in the recent West End run. While Dobson certainly trumps Hart vocally, the comedy is disappointingly played down a little here, making the character slightly less entertaining and less memorable than previous interpretations. The supporting cast is strong however with Richard Meek as charismatic con-artist Rooster, Alex Bourne as Mr Warbucks and Carolyn Maitland as his virtuous PA Grace Farrell, all standing out for their performances.

But the real stars here, of course, the children, particularly Annie played by the talented Taziva-Faye Katsande on press night. Winning us over with the musical numbers MAYBE and TOMORROW, Katsande not only has an impressive vocal ability but also the comic timing to make this eponymous character both endearing and gutsy.

Yet, while efforts by creative team certainly help to freshen up this production, the 40-year-old story is now beginning to show its age and the cheesy cuteness of the script begins to grate after a while.

That said, you can’t fault ANNIE for its feel-good factor with songs like IT’S THE HARD KNOCK LIFE, EASY STREET, I DON’T NEED ANYTHING BUT YOU and TOMORROW, all sounding and looking great thanks to Daniel Griffin’s musical direction and Nick Winston’s punchy and inventive choreography.

If you’re a fan of the original musical or 1982 film, you can bet your bottom dollar that you’ll have a good night.