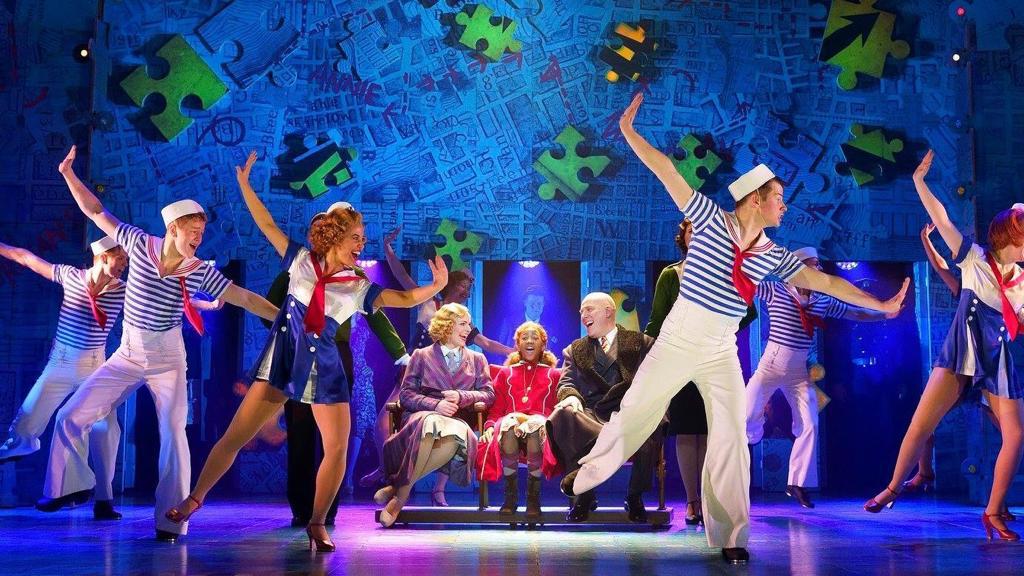 “all performances are shaded by Carolyn Maitland making the most of the straightest role of the show, Warbuck’s assistant and love interest, Grace Farrell.”

It’s only as the house lights begin to drop and we nestle into our seats that my eight-year-old companion hits me with it.

Now she tells me. I’m supposed to be the one who doesn’t like Annie.

I just need to hear the words ‘I’ll luv ya, tomorrow’ in shrill NYC tones and I’m taken back to 1980s’ school holidays when living room curtains were pulled shut and my sister played her VHS copy of the film, recorded off the telly, on an apparent non-stop loop.

Things like that stay with you. In all honesty, images of the pint-sized bossy boots marching through 1930s’ Manhattan – all sharp elbows and flaming red hair – still haunt my darkest dreams.

The little one next to me has a simpler take on the matter, “I don’t like the song Dumb Dog, she shouldn’t make fun of that poor dog”.

So no daddy bonus points from tonight then, we can though at least try to work out our issues together.

But what’s this? Sooner than you can say ‘I love you Miss Hannigan’ scowls turn to grins. It is hard to resist the joy of a stunning take on It’s The Hard Knock Life, all ‘who the hell are you?’ orphanage attitude, stomping mop pots and whip sharp choreography.

To our left Brian May looks proudly on as his other half, Anita Dobson, arrives on stage as the drunken grotesque Miss Hannigan.

And the show rattles along at a fine old pace. Within no time Daddy Warbucks (played by Claude from The Apprentice lookalike Alex Bourne) arrives to sweep young Annie away from her grubby dormitory hell and into a super-rich, art deco dreamland.

President Franklin D Rosevelt is so taken by the young orphaned protagonist he is moved to develop his New Deal programme and lead the US out of the Great Depression (imagine what could she do with Brexit).

There are fine efforts across the cast – Richard Meek cuts a dastardly Rooster with Jenny Gayner as his gold-digging sidekick Lily – but perhaps all performances are shaded by Carolyn Maitland making the most of the straightest role of the show, Warbuck’s assistant and love interest, Grace Farrell.

But the night really catches fire when lit up by the energy and ‘never-say-die’ attitude of the gang at Hannigan’s orphanage – it is hard to know who to pity, the irrepressible inmates or their uncaring yet continually outmanoeuvred jailer.

And there’s no denying it’s a fine old soundtrack.

The oft-reprised ‘Tomorrow’ can be grating, but Easy Street, You’re Never Fully Dressed Without a Smile and Maybe, are all melodies that can be later heard whistled on the Metrolink.

And perhaps best of all – for one member of the audience at least – they skip ‘Dumb Dog’ entirely.

‘That’s the greatest show I’ve ever seen”, raves my once-cynical off-spring on the way home.

She’s a convert. And I suppose I am too.

But she needn’t expect the video in her stocking next Christmas.

Annie is on at the Opera House until February 16.